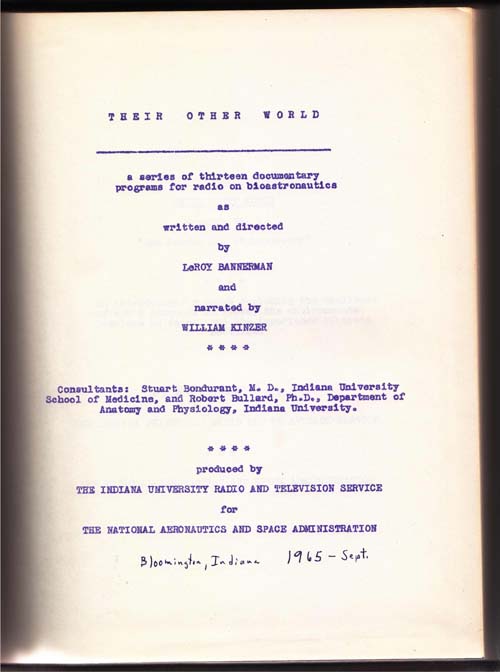 Their Other World: a Series of Thirteen Documentary Programs for Radio on Bioastronautics (Radio Scripts)

This is a carbon copy of a typed manuscript approximately 220 pages in length and bound in black buckram. Large glue stain to verso of back board, no other defects. . The manuscript consists of scripts for thirteen documentary radio programs, each about 16-17 pages in length. The scripts are double-spaced with some single spacing portions as well. As the title indicates, they were prepared for NASA, written and directed by Leroy Bannerman and narrated by William Kinzer. The scripts were written and produced just as NASA's Gemini Program was getting under way. They focus on such themes as zero gravity, space medicine, the atmosphere of the astronaut, the G-force (gravity) , astronaut selection and training, space nutrition, solar winds, space biology, mental and emotional stresses on astronauts, sensory deprivation, brain function and more. . Their Other World Series. 4to 11" - 13" tall. ~220 pages. L7

Title: Their Other World: a Series of Thirteen Documentary Programs for Radio on Bioastronautics (Radio Scripts)

Publisher: Bloomington, IN. Bloomington, IN, The Indiana University Radio and Television Service, for National Aeronautics and Space Administration (NASA): 1965

Their Other World: a Series of Thirteen Documentary Programs for Radio on Bioastronautics (Radio Scripts)